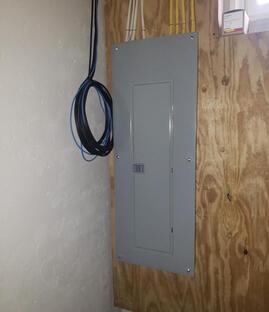 The team at JDM Electrical Contractors has over 20 years of experience with residential wiring. Call us at 609-989-8097 to schedule a free consultation.

Circuit breakers are safety devices built into your home’s main service panel. When something goes wrong with your home’s circuits, they cut the flow of electricity to prevent a fire. This usually means lights out for part or all of your house.

– Every circuit in your home has a limit to how much power it can safely draw. This power is measured in amps. Usually, half a dozen outlets will share a 15 to 20 amp circuit breaker.
Running electricity causes wires to heat up. If the circuit breaker didn’t trip when a 15 amp circuit tried to use more, the wires would keep heating up until something caught fire or melted.

So how easy is it to overload a circuit? Surprisingly easy. A toaster can draw up to 9 amps. Many heavy kitchen gadgets like stand mixers and food processors can draw closer to 12 amps.

If your home is an older construction with 15 amp breakers, cooking a family meal or making cookies can easily use enough electricity to trip a single circuit.

The short-term solution to this is to be careful about how many appliances run at once. The long-term solution is to have an electrician either break your kitchen into multiple circuits or install a larger circuit breaker if your lines can safely handle it.

– When modern electrical motors break down, the circuits that run them usually just die. Older tools tend to be a bit more sturdy. An old Craftsman jigsaw won’t just burn out if the motor is dirty or damaged—it will keep drawing exponentially more amps until it either catches fire or a fuse blows in the tool.

Older fuses and circuit breakers can also be fairly unreliable. The old toy train under a Christmas tree may not look very dangerous, but the 1950s era transformers that run them have enough power to spot-weld a metal screwdriver to the tracks before their fuses blow.

On coffee pots and toasters, it is usually cheaper to replace them than to repair them.

Expensive tools and large appliances should be serviced if they’re overheating.

Either way, this is one of the most dangerous ways for a circuit to trip. Once an appliance starts overheating, it’s just a matter of time before the breaker doesn’t trip in time to stop a fire.

– When a hot wire comes into contact with another hot wire, it creates a “short” that will instantly trip a working circuit breaker.
Usually, shorts are caused by damaged plugs and cords. Puppies chewing a lamp cord, vacuuming over a phone charger, and yanking plugs out of the wall like you’re Indiana Jones cracking a bullwhip can all strip the plastic casing on electrical plugs. Once this happens and two wires touch, there will be a dramatic short the next time its plugged in.

A short circuit can be recognized by the shower of sparks, and a small scorch mark on whatever outlet you tried to plug into.
If the cord is a standard detachable power cord, there is little point in repairing it. Toss the cord and get a new one at your local home improvement store.

If the cord is integral to your appliance, you will need an electrician to safely repair it.

Under no circumstances should you wrap a cracked electrical cord in black tape. That’s not a fix—it’s a recipe for a house fire.

– Ground faults are what happens when a live wire touches a grounding wire. Power surges where it shouldn’t go and a circuit breaker trips to cut the flow.

This can happen with damaged outlets, loose wires in a light fixture or ceiling fan, or damaged power cords.

A ground fault is a lot like a short circuit, but with fewer sparks and less chance for a fire. However, the problem is usually harder to identify.

As with short circuits, only an electrician should try to repair this damage.

– Sometimes it seems like your breaker is tripping for no reason. There wasn’t any big appliance plugged in, no damaged wires are visible, and it seems like a gremlin is just playing tricks to ruin your day.

While it’s always possible the problem is a bad wire somewhere out of sight, this is most likely the case of a bad circuit breaker.

Breakers have a lifespan of around 40 years according to the Consumer Product Safety Commission. Homes built in the early 1980s are at the upper limits of their circuit breaker’s expected lifespan, and homes built before that are long overdue for new breakers.

While a breaker failing closed is just annoying, a breaker that fails open can easily cause a house fire. If you’re unsure of the condition of your circuit breakers, an electrician should be called in to look at your service panel.

Circuit breaker problems? Call an electrician! Think of circuit breakers like a warning sign. If they’re tripping, something is going wrong with your home’s circuits. Like a check-engine light on your car, it’s time to call the professionals before something gets seriously damaged or catches fire.

The team at JDM Electrical Contractors has over 20 years of experience with residential wiring. Call us at 609-989-8097 to schedule a consultation.

Has your circuit breaker been tripping a lot recently? Have you been worried that you may need to replace it… that you may have a faulty…

Whether it’s your first time or you’re going onto your fourth house, selling your home can be a stressful process. Between finding a buyer, doing…

Get Started
Back to the top